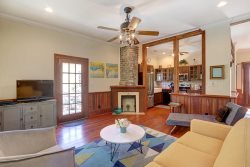 Fun in the outdoors! Great location by Forsyth Park! Outside roof top deck!

Description
Modern conveniences await in this beautifully appointed, newly renovated Southern home nestled just off one of Savannah's famous, beautiful squares. As you step inside to the stone entryway, you'll enjoy the airy feel of the bright decor. The kitchen is stocked with everything you need to cook a romantic dinner atop stainless steel appliances and granite countertops. The master bedroom features a Queen sized bed, desk area, and a flat screen TV. The master bathroom has a clear glass and marble stand-up shower and a pedestal sink. The living room features plenty of seating around a decorative fireplace with a flatscreen TV and a cozy dining area for two. Outside, you can catch a cool Savannah breeze while sipping sweet Southern tea rocking away the summer nights on the rocking chairs on your back patio.

History
The vacation rental offers everything necessary to enjoy your stay in the historic district of Savannah and has been around for hundreds of years. The home was originally built in 1838 and is the oldest home in Savannah south of Liberty Street. It was built in two stages – the original wood-sided portion (left side) was constructed in 1838 and the stucco portion (right side) was added in 1860. Lewis Bird, a prominent Savannah attorney at the time, began the original construction but sadly perished with his entire family on the Steamship Pulaski when it exploded off the coast of North Carolina and sank on June 14, 1838. Mr. Bird's mother completed the house and later sold it to his law partner Mr. Baldwin who lived in it for many years. As one of the nicer manor homes along Liberty Street in Savannah during the Civil War, the house was seized and occupied by General Sherman’s staff in December 1864 as part of their capture of Savannah during the infamous Sherman’s March to the Sea. Over the years, the house has been a private residence, a boarding house and a neighborhood tavern known as "Harry's Place." By the 1960s, it had deteriorated so badly that homeless people were living in it and it had caught fire several times – yet the house miraculously survived.

In the Area
The property is ideally situated at the corner of two historic Savannah streets – Liberty Street and Barnard Street and within easy walking distance of the entire Landmark Historic District, including:

Rate Information
Renting homes from Southern Belle is painless and professional. We take credit cards and require a $300.00 deposit to confirm the booking which is applied towards the remaining balance. For example, if your total is $1,500, we will take a $300 deposit and your remaining balance will be $1200. Thirty days prior to your arrival our booking software will charge the balance automatically. We also sell Traveler's Insurance which covers medical cancellations.

If you have any questions, please feel free to give us a call. Thanks so much for looking.

Page: 4 of 4 Write a Review
Carrie
Reviewed: Oct 18, 2013
Property Manager
Everyone was extremely kind, helpful and most of all prompt.
Property
Located in the beautiful historic district of Savannah, my husband and I were thrilled with the property we stayed at. It was within walking distance of the many things Savannah has to offer. The apartment offered many amenities which made our stay even more enjoyable. All staff members we spoke to were very kind and eager to make our stay pleasant. Great job Southern Belle!!
Cathy
Reviewed: Oct 17, 2013
Property Manager Property
set
Reviewed: Oct 17, 2013
Property Manager Property
Excellent place to stay on vacation. Would definetly stay there again when we visit savannah.