One of the cultural delights to be found in Savannah, Georgia is the Mercer Williams House Museum. The site is known for its lovely and unique structural components as well as for its rich history.

From the marble mantel of the white Carrar variety, which was carved by hand in Italy, to the rich 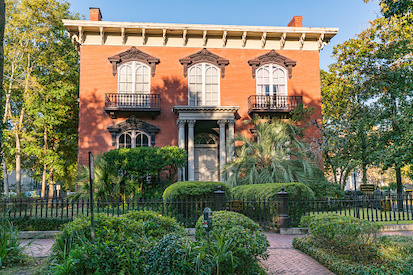 mahogany furnishings created in Grenada the house holds a wealth of beauty and historical significance.

The Mercer House was started in the year 1860 and was not completed until 1868 because of the Civil War. While the house was designed by the prominent architect John S. Norris it was finished by the future home owner John Wilder.

Midnight In The Garden Of Good

The house was restored to its glory after the Civil War by Jim Williams who bought the house in 1969 and dedicated his efforts to the structure. It took Williams two years and is only one out of numerous buildings that Williams devoted his career of restoration to accomplishing. Williams’ feats of restoration number over 50.

The historically renowned structure not only houses beautiful furnishings but also a gory story or two. Williams’ assistant was fatally shot on the premise, a tale which is included in the story written in 1994 by John Berendt. Berendt’s story is titled Midnight in the Garden of Good and Evil.

Even before the death of Williams’ assistant two other deaths had already been recorded as occurring at the site. The first death, recorded in 1913, was of a previous owner who tripped and fell over the banister of the second story and later died from injuries after three days. Then in 1969 the second death occurred when a boy impaled himself on the iron fence after he fell off the roof while chasing pigeons.

The Mercer House is not only well known for its grim history and awesome architecture but also for its furnishings and art ranging from the 17th to the 19th century. The stunning display of historical items and estate was only recently opened to the general public. In prior years the house was only opened to local organizations of the historic or charitable nature.

Visitors to Savannah, Georgia interested in glimpsing the history of the estate and its residents can find the Mercer Williams House Museum located at 429 Bull Street in Monterey Square. Reservations can be made online. The house is open to viewing Monday through Saturday from 10:30 AM to 4:10 PM and on Sundays from noon to 4:00 PM.

Reservations to tour the house and furnishings can be made online at or by phone using the toll free number 1-877-430-6352.

In addition to the house and its estate visitors can also visit the Carriage House Shop nearby to find gifts and souvenirs to take home. Savannah is an area rich in historical and cultural places. Visit the past but live in the present in Savannah!