The Forsyth Park neighborhood in Savannah, Georgia is anchored by the famous Forsyth Park.

The park takes up the southern edge of the historic district, so you can expect Forsyth Park vacation rentals to be on the quiet side of the city. Before it became Forsyth Park, this premier 30-acre park originated as a 10-acre green space in the 1840s. Another 20 acres was added to this project when Governor John Forsyth donated the land needed to complete the large pubic park that would later bear his name. The park is defined by Whitaker Street on the west, Gaston Street on the north, Drayton Street on the east, and Park Avenue at its southern edge. 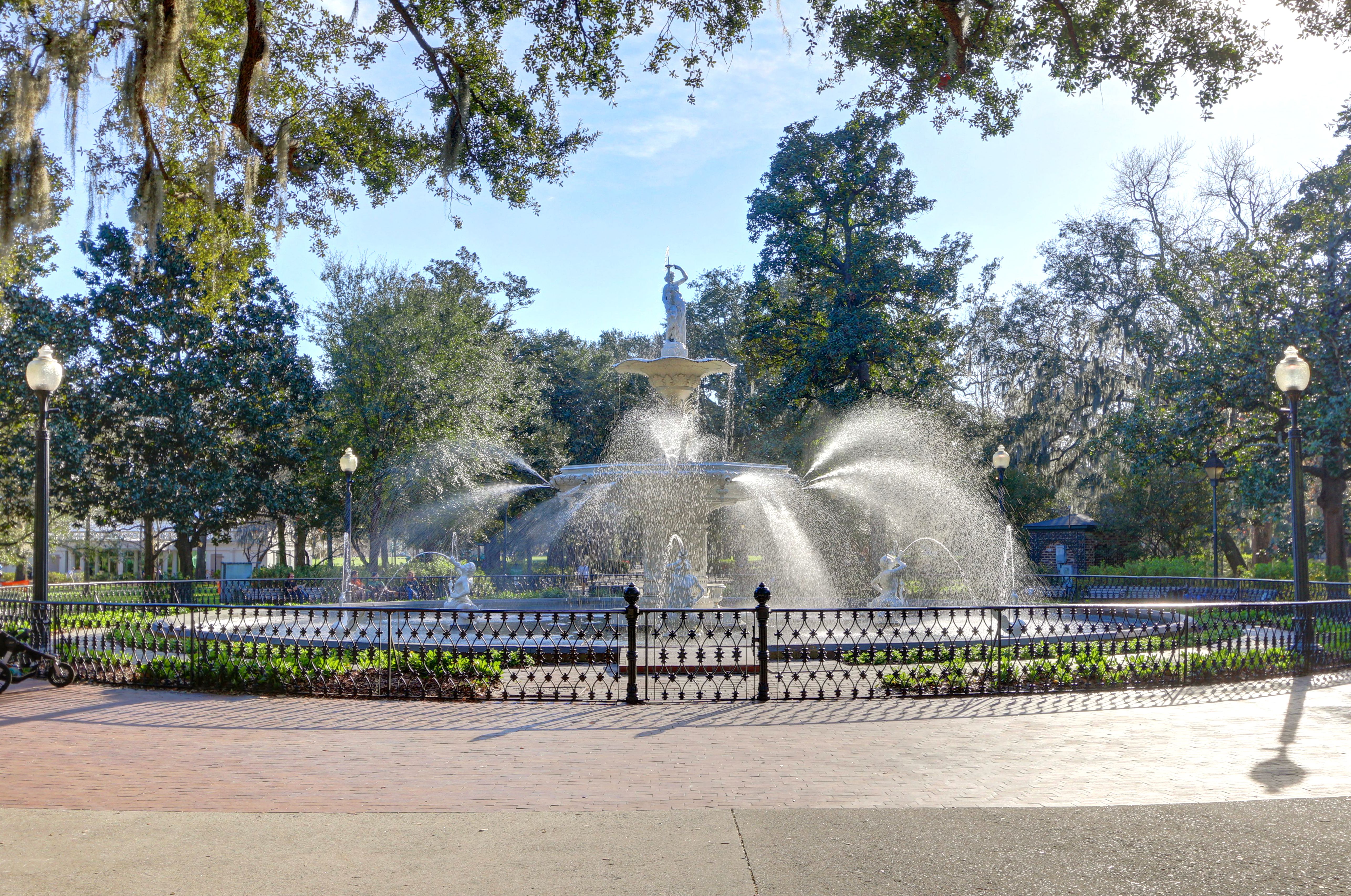 The site of Forsyth Park is historically significant. During the American Revolution, the park was adjacent to the British defensive stronghold. This area became a campsite for French and American allied forces during the revolutionary era. Historians believe that the site of the Forsyth Fountain on the northern end of the park is the exact spot where French military forces commenced digging siege trenches that they hoped would lead to British defenses.

If you are fortunate to spend time in Forysth Park vacation rentals that overlook the Forsyth Park Fountain, take the time to experience this feature up close. It was inspired by a Parisian fountain located at the Place de la Concorde. The fountain was added to Forsyth Park in 1858 and has since become one of Savannah's main attractions and a city icon as well. Staying at Savannah vacation rentals will give you an opportunity to enjoy the fountain, the park's tree-lined walking paths, open areas for various events, moss-covered oak trees, and a scented garden.

The park is a beloved landmark in Savannah. It is an idyllic setting for relaxing, people watching, and socializing. Various outdoor events are held at the park such as a weekend farmers market on the southern end, Civil War reenactments, and cultural events throughout the year. If you are staying at Forsyth Park vacation rentals, spend an afternoon walking the paths or watching the world go by as you take a break on a shaded park bench.

Forsyth Park is on the southern edge of Savannah's historic district. Take note of this as you choose among various Savannah vacation rentals. It serves as the link between the city's historic and Victorian districts. Savannah vacation homes in the Victorian district have distinctive architectural details. This area has achieved the distinction of being a part of the U.S. National Register of Historic Places. 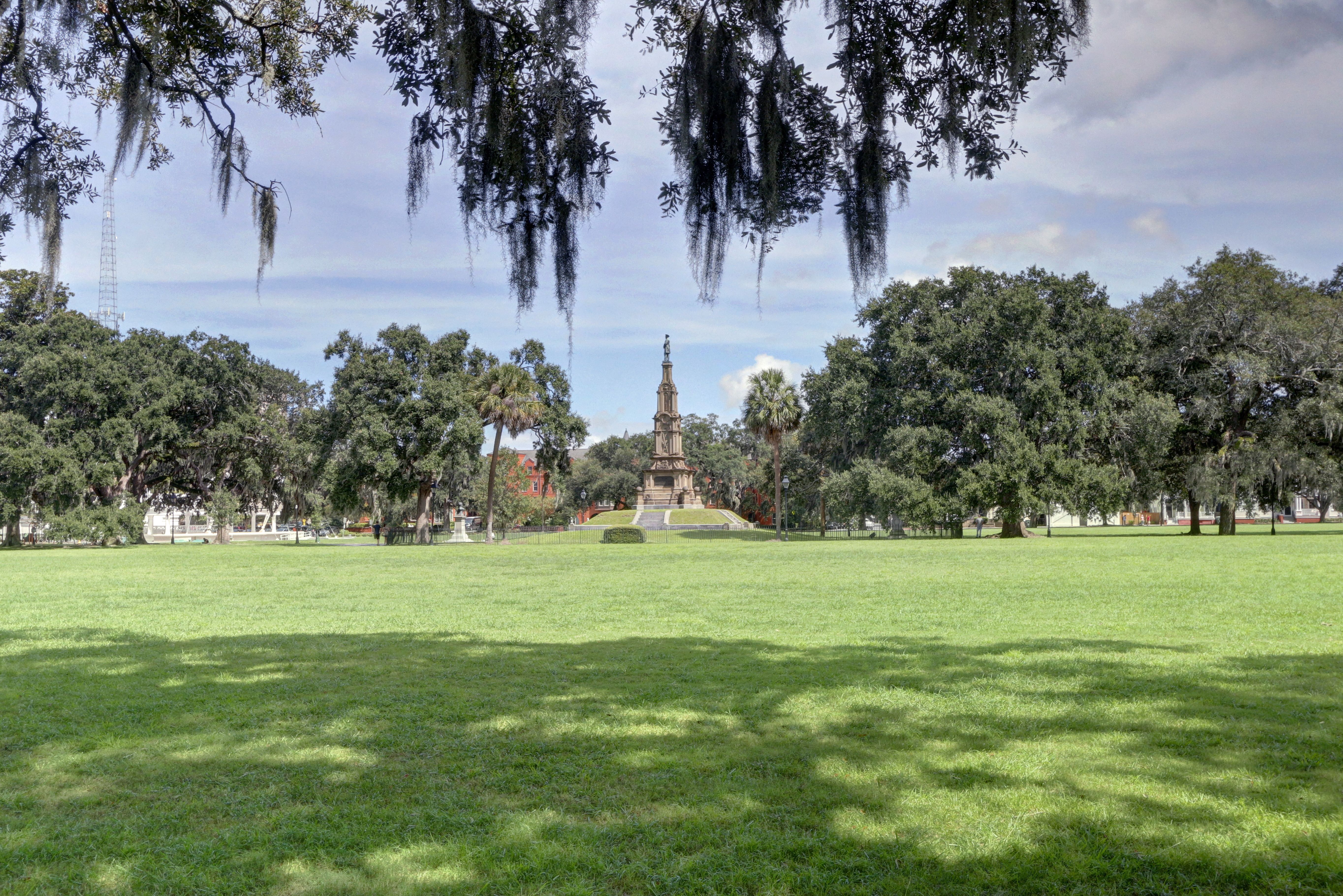 Forsyth Park is not the only park in this part of Savannah. When the city was slated for beautification under the leadership of General James Oglethorpe, the plan included laying out a series of open squares that were surrounded by residential blocks. Currently, 22 out of the original 24 squares are still in existence. Each one is named after a historic event, person or place with the accompanying markers, statues, or tributes displayed in the squares. In much the same way that Forsyth Park is used as a reference point for Savannah vacation rentals, the city's squares are often cited as location markers. In the Forsyth Park area, Monterey Square, named to honor American victory in the battle of Monterrey, is only a few blocks north of Gaston Street. The historic Mercer House is part of Monterey Square. This house was the movie location for the 1997 film Midnight in the Garden of Good and Evil. Chatham Square and Calhoun Square are located in the same general area along the Gordon Street corridor.

The Savannah College of Art and Design is a private arts-focused university with locations in Atlanta, Hong Kong, and France. The college is instrumental in the restoration of several of Savannah's architecturally significant buildings. These buildings were refurbished and became part of SCAD's sprawling campus. It plays host to annual events, including the Savannah Film Festival, the Sidewalk, and Sand Arts Festival, and various art shows that showcase students' work. Visit the SCAD Museum of Art, a contemporary art museum that was established to enrich education and provide exhibition opportunities to SCAD students and alumni. Staying at Forsyth Park vacation rentals will put you right in the heart of the action especially during the festival season. The park is a popular site for many events, including the Shakespeare Festival and the Savannah Jazz Fest.

Savannah vacation homes in the Forsyth Park area will be on the calmer side of town. The pace is laid-back and less hectic with all the touches of gracefulness reminiscent of the Old South. The park may be the biggest attraction in the area especially at night when the fountain lights are on, but there are some places to dine and unwind. A restaurant called Drayton is just east of the park while the rooftop lounge called Casimir's is in the same general area. For vegetarian offerings, the Sentient Bean is south of Park Avenue near Bull Street. More restaurants, bars, and entertainment spots are located closer to the university area.

Whether you plan to stay for a weekend or several weeks, Savannah vacation homes in the Forsyth Park area are usually good options. This neighborhood is away from areas with heavy traffic. However, many of the attractions that make Savannah a vacation destination you will want to return to are conveniently accessible from this area.