When the book “Midnight in the Garden of Good and Evil” was published, it created a literary sensation regarding the city of Savannah. The movie then brought the tale of the city’s eccentrics and gothic atmosphere to the big screen. Ever since, visitors have sought out the places seen in the film, including Mercer House, Bonaventure Cemetery and Forsyth Park.

During a vacation in Savannah, movie lovers can enjoy a tour of sites you’ll recognize from various films. After all, Savannah has served as a location in films dating back to the beginning of the industry with “Under Southern Skies,” a 1915 silent film. Since then, the list of movies based in Savannah or filmed here is long – more than 75, in fact.

“Now and Then,” a 90s teen movie starring Christina Ricci, Gaby Hoffman, Rosie O’Donnell and Demi Moore, was filmed at downtown squares and Bonaventure Cemetery. Scenes from “The General’s Daughter” starring John Travolta were shot at Savannah State University and Madison Square. While Tybee Island served as the backdrop in “The Last Song,” a Miley Cyrus movie based on a Nicholas Sparks novel.

In 2015, “Magic Mike XXL” filmed in Savannah and Tybee Island. In fact, many scenes were shot on one of the Southern Belle properties.  You can book your vacation to this historic beach home where Magic Mike XXL was filmed by visiting Movie House!  More recently, scenes from “Gifted” staring Chris Evans and Octavia Spencer, were filmed in nearby Wilmington Island in 2016 and the Hallmark Channel’s “The Beach House” was filmed on Tybee Island in 2018. 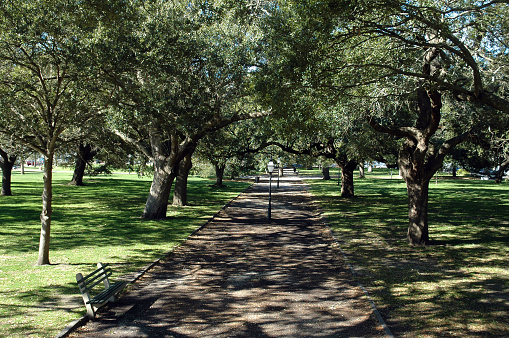 The Movie Tour of Savannah’s Historic District lasts about an hour and a half and takes visitors to Mercer-Williams House, Madison Square and other sites in Savannah’s Historic District. But that’s just a few of the sites featured on the tour. Others include the Forrest Gump bus stop bench and the Six-Pence Pub from “Something to Talk About” where a nightgown-clad Julia Roberts looked through the window to see her husband (Dennis Quaid) on a date.

Taking a movie tour is a great way to spend time during your Savannah getaway, as well as to get to know the area.

Book your stay in a Southern Belle Vacation Rentals property that puts you right in the middle of all the action. We have lovely properties in the same neighborhood as Mercer-Williams House, the Forrest Gump bench, and other movie landmarks.