Newcomers to the city of Savannah are often pleasantly surprised at how simple it is to find their way around the town. Divided into multiple squares, the grid layout leads to easy navigation and an abundance of parks at the center of each square. Lafayette Square, the namesake of the Marquis de Lafayette, is one of the more renowned squares, famous for its photographic appeal and the grand manors that dot the landscape, the French-Gothic style Cathedral of St. John the Baptist, and the beautiful fountain found in the square's center.

Who was the Marquis de Lafayette?

Georgia was one of the original 13 colonies and the Marquis, a French aristocrat, was a leading figure in the Revolutionary War. Fighting under General Washington, even though he had no experience, the two men became fast friends, and after fighting for the revolutionists, upon his return to France he was instrumental in getting the French to send help and supplies to the new nation. Considered a national hero, many cities, parks, and streets in the United States are named after this brave man, with Lafayette Square in Savannah being the most well-known. 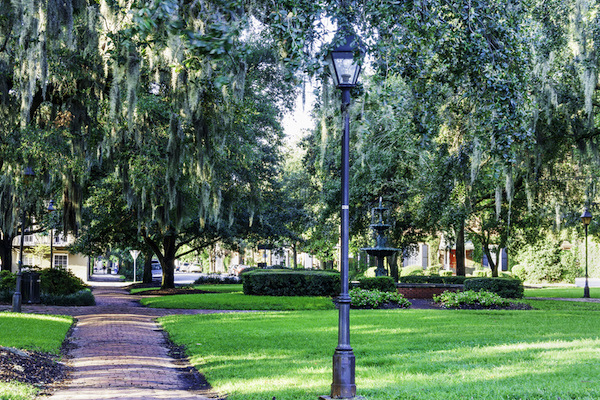 In addition to the Cathedral, built in 1876 and designed with the highest steeples in the area, one of the more famous homes found on the square is undeniably the Andrew Low House, the father-in-law of Girl Scouts founder Juliette Gordon Lowe. Today, the Andrew Low House is open for tours, offering a glimpse into the world of the wealthy man who was a big part of the history of Savannah.

The Hamilton-Turner Inn bears the distinction of being the first home in all of Savannah with electricity. Constructed in the Second Empire style, the Italianate touches that give the home its grandeur add an extra bit of glamour. As many of our city's "grand ladies" are, the Hamilton-Turner Inn is rumored to be haunted by more than a few of its former tenants and is also suspected to be the building Disney's Haunted Mansion was modelled after! Once you get your first glimpse, if you have ever been to the famous theme park, you'll immediately understand how those rumors started.

The cozy warmth of our rentals makes them a popular choice for vacationers from all over the world. Featuring gourmet kitchens, luxurious bedrooms, and million dollar views, your Savannah vacation becomes more memorable upon your first steps across their thresholds. Reserve yours today!