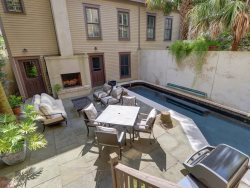 Savannah, Georgia is a travel destination that defies simple description. For nature lovers, Savannah is a sprawling green space of moss-bedecked oak trees and beautiful parks and squares. For history buffs, Savannah offers various opportunities to explore the crucial roles that the city and the region played during various parts of history. For architecture geeks, the city has much to offer in the stately mansions found in the Savannah historic districts in the downtown area and further south in the Victorian district. The stories behind the Hostess City of the South are inextricably linked with the historic structures that have survived wars, fire and the passage of time. Savannah vacation rentals are far from the cookie-cutter accommodations found in popular vacation destinations. Many of these properties have been carefully chosen and meticulously upgraded to include modern features to ensure that guests have a comfortable and memorable stay. A lot of attention is given to preservation especially when these properties are located in historic neighborhoods. Regardless of how these historic or historically significant buildings are rehabbed, care is taken to preserve the gracious atmosphere that characterize southern homes in the Savannah historic districts and other neighborhoods. Visitors to the city can choose from a variety of Savannah vacation rentals: large antebellum mansions, charming cottages and garden homes. Having these choices ensures that you can always find downtown Savannah rentals suitable to the size of your party, the purpose of your trip and the length of your stay. Savannah was developed based on an elaborate Neo-classical layout championed by General James Oglethorpe. The Oglethorpe Plan called for establishment of wards anchored by a square. The squares were surrounded with trust lots for public buildings and tithing lots to the north and south sides of each square. Tithing lots were reserved for private estates of the colonists. This layout is still evident in the Savannah historic district because of the preservation efforts by various groups. Larger estates typically consisted of the main house and several outbuildings that were slated for specific purposes such as food storage, food processing and other work areas. One of the more common outbuildings in an estate would be the carriage house or the coach house. The carriage house provided a covered shelter for the homeowners horse-drawn carriage in earlier times. Carriages were later replaced with motorized coaches and stored in the same carriage houses. The typical carriage house would have one or more bays. Each bay would have its own entrance, consisting of double doors that opened outward. The carriage house usually included a self-contained apartment above the storage bays. These apartments may have been assigned to groomsmen, chauffeurs and other household workers. A section of the carriage house may have been intended for equipment storage or even horse stables. These living quarters were integrated into the design as loft-style living spaces or second floor attached residential units. As the city grew and changed due to economic and social forces, large estates were broken up, and separate units were spun off as independent properties. Some carriage houses became downtown Savannah rentals that were spacious with an open layout that made redesigning and renovating a manageable process. Carriage houses were integral parts of large estates. As such, they were designed with some of the architectural details featured in the main house. Carriage houses that were part of Victorian-inspired estates picked up some of the elaborate details from the main buildings such as bay windows, scroll work on the faade and even stained glass features. These carriage houses were located close to the road and surrounded with landscaping consistent with the features of the main house. However, some carriage houses were designed with function in mind. These structures consisted of a single room with just enough plain windows to bring in some natural light. These simple structures were often tucked away from the main house. The living quarters that were included in these carriage houses were utilitarian. Through the efforts of the Historic Savannah Foundation, the Savannah College of Art and Design and several smaller organizations, many of the citys important buildings and landmarks were saved from being permanently obliterated in the name of progress. By the 1930s, many of the squares had been sacrificed for roadways and old buildings were treated as tear-downs to make way for new structures. SCAD stepped in and developed their sprawling campus in and around the Savannah historic district. Elegant older buildings were refurbished to develop the campus, but great care was taken to ensure that the exteriors and other important details were faithfully preserved. It is through these efforts that Savannahs carriage houses exist today in various incarnations: restaurants, shops and Savannah vacation rentals. Like the SCAD buildings, these carriage houses have been retrofitted with modern amenities, but evidence of their original use can be seen in the intricate molding and scroll work details. The spacious and fuss-free layout of these downtown Savannah rentals are perfect for parties of two and a few more. These accommodations are perfect for travelers who expect to entertain friends and family in the open-plan living area. Many of these carriage houses are operated independently from national chains, so you can expect personalized service that prioritizes guest comfort at all times. As a bonus, there are some carriage house vacation rentals that are located near the downtown district where you can walk to the shops, restaurants and museums.