If watching men in kilts toss a tree trunk is your idea of a good time, you’re in luck. The Savannah Scottish Games returns to Bethesda Academy, 9520 Ferguson Ave, on May 4, with an array of traditional Highland food, fun, music and dance.

Scottish influence in the region dates to 1737, when the St. Andrew’s Society formed a Savannah chapter of the organization, named for the patron saint of Scotland. The Savannah Scottish Games started in 1976 and are part of a circuit in which burly athletes compete for prizes.

Though not required to enjoy the competitions, it’s a good idea to have some understanding of the games. Highland warriors had to stay in shape for their inevitable battles, requiring skill and strength. Scottish Games test those valuable qualities. The Caber Toss requires participants to toss a tapered, trimmed pole. Tossing the Sheaf is an event in which a pitchfork is used to hurl a straw-stuffed burlap bag. The Scottish Hammer Throw is self-explanatory, though it may help to know it’s a 22-pound hammer. The Clachneart or Stone of Strength involves tossing a stone of various weights. Learn more at a one-hour clinic held at 7:30 a.m. on game day.

The Games host the U.S. Inter-Regional Championships Highland Dancing Southern Regional event, one of six competitions held each spring. Five age groups compete in four traditional dances. The top three winners in each group at Savannah are eligible to compete in the U.S. Championships. Watching dancers in their bright tartans is a highlight of the Games. 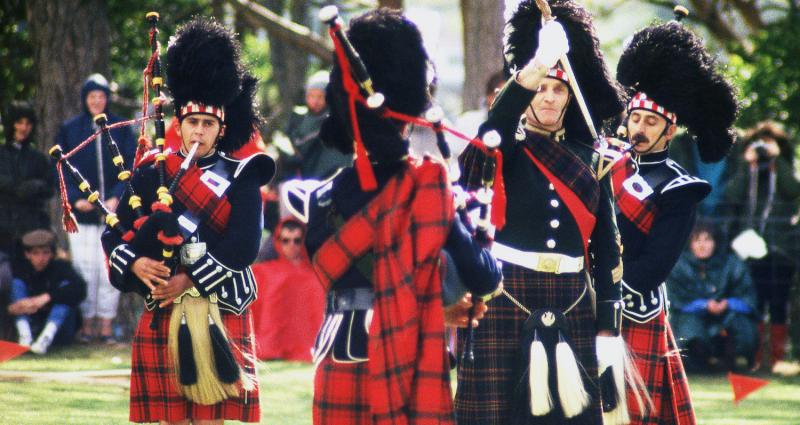 One of the thrills of Games are the pipes and drums celebrating Scottish heritage. Bands scheduled to perform at the 43rd Games include Mercer University Pipes & Drums, Coastal Florida Police & Fire, Savannah Pipes & Drums and the Charleston Pipe Band. In addition to the Pipes & Drums, spectators can enjoy a great lineup of Celtic music including traditional tunes by MacGilliossa, a five-piece crowd pleaser and the Coastal Celtic Consortium, a loose-knit group of local musicians with a Celtic influence.

Scottish Games wouldn’t seem authentic without Celtic fare that brings a taste of the Highlands. Chow down on peat-smoked Haggis, shepherd’s pie, Scottish barbecue and more. Or enjoy fresh baked soda bread, scones, and shortbread rounds. Of course there’ll be brews, too!

For the Wee Ones

Children can compete in their own test of strength in pint-sized versions of the sheaf toss, stone throw and caber toss, along with tug-of-war and sack races. A Celtic storyteller will regale youngsters with tales. Other activities include dance, games, crafts and a kilted run.

Put Savannah Scottish Games on your calendar and book a stay with Southern Belle Vacation Rentals.