For those visitors not familiar with Tybee Island, this beachfront town on the Georgia coast has a lot of history and a rather unique atmosphere it is more than willing to share. The island has over five miles of beaches to offer, marsh and backwater views, and it's a great spot for people watching and birdwatching. 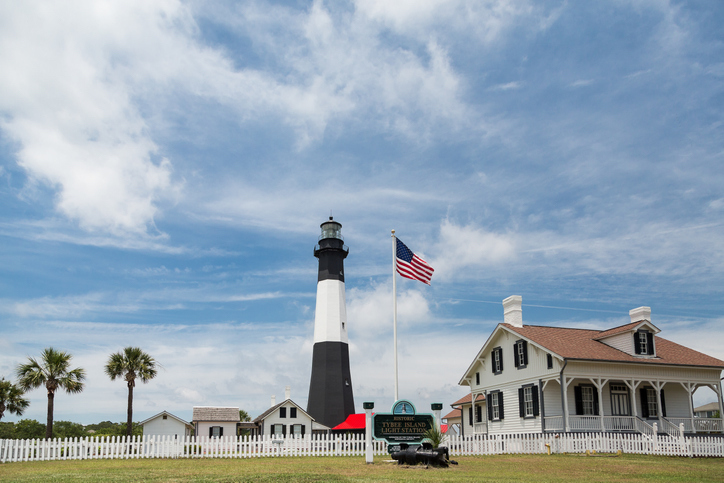 The name "Tybee" is thought to have come from the Native American Euchee word for salt. The Euchee tribe lived in the area long before the Spanish arrived to claim it in the 1500s. Pirates also are reported to have visited the island to find sanctuary and to bury treasure.

The Savannah River is the northern boundary of the island (and of the state), making it the ideal location for a lighthouse and a strategic location for a fort. The Tybee Island Lighthouse, first built in 1736, is an island landmark and one of the few lighthouses of the period still in operation. You can visit the Tybee Island Lighthouse and Museum for more of the island's history.

Fort Screven was a valuable part of our coastal defensive systems until it was decommissioned in 1947. Parts of the fort remain, and some portions have become incorporated into residences. The Tybee Post Theater has been renovated recently and is the island's only theater. Some of the Officer's Row residences still remain and can be viewed while walking on the north end of the beach.

One last (fun) piece of history – on February 5, 1958, an Air Force B-47 dropped a hydrogen bomb off the coast during training exercises after colliding with another jet. The "Tybee Bomb" wasn't armed and to this day remains buried in the murky waters off the coast.

Tybee may not have bright white beaches with sparkling turquoise water, but its character makes it special. This is a working town, and with the Port of Savannah just up river, it is a busy place for container ships, not to mention oyster and shrimp boats and charter boats. The sand and surrounding waters are home to loggerhead turtles and other sea life - dolphins, turtles, sharks, rays and right whales can be seen in the water off the coast. And, with its variety of habitats, it is a bird watcher's paradise.

Tybee residents love to have fun and know how to enjoy themselves. The locals are welcoming to visitors and new comers and are more than willing to share their opinions and stories to anyone who will listen. You can come for a visit any time of the year, but you won't want to leave.